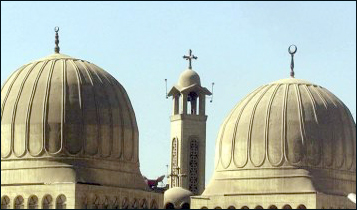 The past couple of weeks in Egypt have witnessed intense discussions within the national political forces and the media regarding the recently-released draft of the unified law for building places of worship. There have also been disquieting attempts by sceptics, hard-liners, and extremists to hijack the long-awaited law. It has been years on end today that numerous political circles, among which was none less than the National Council for Human Rights, have untiringly called for the promulgation of the law. It was hoped that it would put an end to the attacks against Copts, which frequently erupted due to the lack of a law of the kind. Yet no sooner had the draft law been released—first as a bill by the Justice Ministry then a draft decree by the Supreme Council of the Armed Forces—than a fierce campaign erupted criticising, rejecting, and condemning it. Some went so far as to go to court to prevent the law from seeing light. The irony of it is that the draft law never did come as a bolt from the blue, as if people had never heard it mentioned.

The theatrics disregard the dire need for passing a unified law for building places of worship. Indeed, the government finally embarked on the project as a result of mounting public pressure. In this context, distinction has to be made between passing the law, a move that in itself is a great political achievement, and the detailed articles of the draft law which may definitely be subject to discussion. There is no contradiction between applauding the law in principle as a non-discriminative move, and subjecting its details to scrutiny and criticism. This should finally produce a law that fulfills the people’s needs, facilitates matters related to places of worship, and deepens the sense of equality among Egyptians. Putting the law into effect would then follow smoothly.
Predictably, the wide public debate over the law has much to do with the absence of a legislative authority. Normally, bills are debated by legislators. Now that an Egyptian parliament has yet to be elected, the responsibility has fallen on the shoulders of the various forces across the political spectrum, as well as—naturally—the religious institutions concerned with places of worship. Their comments on the law should be officially submitted to the authorities, in order to be included in the law or its by-laws.
I am keen to stress these points because the widely divergent views and heated debate over the bill’s articles is rapidly developing into a fight that threatens to hijack the law and toss it into an extremist trap. Fanatics insist on viewing the law through the prism of inter-faith dissimilarities and Muslim majority/non-Muslim minority relations. By raising these sensitivities, extremists seek to empty the draft law of its content of putting places of worship of different religions on equal footing, and revive the bitter past of detestable discrimination against religious minorities.
Religious institutions and rights activists have raised reservations on specific articles in the law. They require guarantees against possible abuse of power by the governors, who are mandated to issue approvals for places of worship. They need explicit mention of how the population of a given religious denomination in a given location would be determined; they question the provision regarding the minimum distance between any two places of worship of the same religion, and the minimum area mandated for any place of worship. These are all valid points and will be probably taken into consideration when formulating the law. What gives rise to real concern, however, and threatens to hijack the law and sow sedition among Egyptians, are battles of the following kind:
• The draft law released by the Justice Ministry stipulates that sources of funding the erection of places of worship should be identified. Some manipulated this article to question the sources of funding of churches. Others went so far as to call for the Church’s finances to be monitored by the Central Agency for Accounting (CAA). The intentions behind such demands and the persistence of taking the law out of context are all-too-obvious. But the Church is no State institution financed by tax money. It is a civil institution funded by the congregation’s donations and by revenues generated by its endowments. And it has its own financial and monitoring systems. Hence there is nothing whatsoever to justify subjecting Church finances to the CAA.
• The 18 June episode of the TV talk show Anal-Masry (literally I, the Egyptian) focused on the draft law for building places of worship. The guest Mamdouh Ismail, who presented himself as the lawyer of the Muslim Brotherhood, dragged the other guests—the liberals Kamal Zahker and Nabil Sharafeddin—into an irrelevant discussion on the Muslim and Christian faiths, insisting that Copts were in no need of a law to regulate building their churches. It took tremendous effort on the part of the guests and the anchor to bring back the discussion to the original context. Yet the weird and aggressive arguments he came up with prove that extremist currents are still adamant in their non-recognition of citizenship rights or equality among Egyptians. Ismail called for a survey to determine the total area of Coptic churches and monasteries, to prove that Christians have sufficient places of worship and need none more. He ignored—deliberately as it seems—the fact that monasteries have a specific religious role that does not include acting as places of worship, are not open to congregations except in specific times, and are located in remote areas. Moreover, the areas occupied by monasteries accommodate, besides the churches, monk cells and livelihood activities. Ismail’s argument exposed the hidden intentions of extremists to hijack the law. What about the Copts’ need for churches in new towns—in which they live along with their brother Muslims? Are their needs for new places of worship going to be met or will they be referred to the monasteries?
Such irrelevant debate can only serve to ruin the national solidarity that emerged at the outset of this year and deepened with the 25 January Revolution. My worst fear is that this empty rhetoric and the disputes it generates would divert us from the proper course. What would happen were others to follow Ismail’s logic and determine the area of all mosques, zawyas (literally corners, on the ground floor of buildings to act as a Muslim prayer houses), alleys, streets and yards used for Muslim prayers; to conclude that they are more than sufficient for Muslim needs? This is no more than silly argumentation that splits national unity.
Tweet
Author