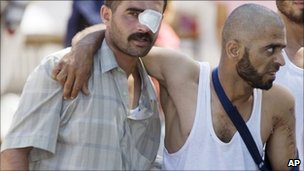 Syria's military has moved into a village near the border with Turkey and a town near the boundary with Lebanon, activists say.

Hundreds of Syrians, some with gunshot wounds, have fled into Lebanon, according to reports.
At least four civilians were reportedly killed by security forces during house-to-house raids and at funerals held for those killed in Friday's rallies.
Dissidents plan a conference on Monday to discuss how to resolve the crisis.
Protests against the regime of Syrian President Bashar al-Assad have gone on for more than three months. Activists say more than 1,300 demonstrators have been killed by security forces and government supporters.
The Damascus government says it is tackling armed groups.
The village of Najia, near the border with Turkey, is the latest to have Syrian army troops and tanks move in, activists say.
Najia is near the town of Jisr al-Shughour, where the government sent reinforcements earlier this month after saying 120 security personnel had been killed by gunmen.
'Faked film'
The official Syrian news agency said the troops had completed their sweep of border villages without any shots being fired.
So far nearly 12,000 people from the region have fled into Turkey.
They show no sign of readiness to come back, despite promises from the Syrian authorities that the situation is stable and there will be no retribution.
Further south, near the border with Lebanon, activists said the town of Qusair was attacked by security forces and pro-regime militiamen after a big demonstration there on Friday.
They said tanks had moved in and many local people had been detained.
At least two civilians were shot dead during Saturday's funerals for victims killed on Friday in Kiswah, south of Damascus, Rami Abdel Rahman, the head of the London-based Syrian Observatory for Human Rights, told AFP news agency.
He added that another two civilians were shot dead by security forces in Kassir, near the Lebanese border.
Residents in the Damascus neighbourhood of Barzeh say a number of people have been arrested there and a curfew imposed, following unrest after Friday prayers.
A Syrian with relatives in Barzeh told the BBC that one dead protester had been used for propaganda purposes by the Syrian security forces.
They had put a gun in his hand and filmed him so that he could be depicted as a gunman on state television, he said.
President Assad has blamed gunmen for the violence.
Scores of dissidents and intellectuals critical of the regime are planning to hold a conference in Damascus on Monday, for the first time since the uprising began in March.
They say the authorities have not banned the one-day gathering.
The BBC's Jim Muir in Beirut says that if the meeting goes ahead, it could be a sign of greater tolerance of dissent from a regime that says it is preparing comprehensive reforms.
President Assad ordered a general amnesty on Tuesday in a bid to quell the unrest, a day after offering a "national dialogue".
Tweet
Pope Shenouda Article