Documented facts about the church in Ain Shams 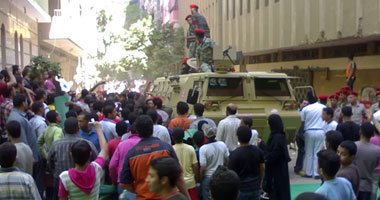 Egypt today appears to be an open field for the free circulation of a host of fallacies and rumours. Subject to neither scrutiny nor correction, many people take them for the literal truth. Some of the most recent fallacies circulated concerned the church of the Holy Virgin in Ain Shams, the re-opening of which, after three years of closure, triggered a crisis some two weeks ago. The Islamists who violently opposed the reopening alleged that the building was a garment factory and had never been a church in the first place. In the so-called “conciliation session” held on 21 May, the Muslim party sought to prevent the opening of the church through offering alternative uses for the building, such as a hospital, community centre, or going back to use as a garment factory. As to the church, a provocative option was offered: that of granting the Copts a piece of land outside Ain Shams to build a church upon. The offer itself is proof of the veracity of the Coptic claim that it was a church, and brings to mind the incident of the church of the two Saints in Sole, Giza, some two months ago. Back then, a hostile mob of Salafis torched the village church and pulled it down, held Islamic prayers on the site and vowed to build a mosque in place of the church. The authorities attempted to bargain with the Copts to give up the church site in return for a plot of land on which to build another church outside the village. The Copts rejected the offer, and the Sole church was rebuilt by the ruling Military Council.

A letter I received from Father Yuhanna Fawzy Bishay, priest of the church of Holy Virgin, Saint John the Baptist, and Saint Paul in Ain Shams al-Gharbiya (the western part of Ain Shams), included details and documents about the church under dispute. Under the title “Documents and facts regarding the church of the Holy Virgin and Anba Abra’am in Ain Shams al-Gharbiya” Fr Yuhanna wrote:
• Formal documents reveal that the place in question has been a church and that allegations it was a factory are totally unfounded. The contract signed on 1 January 2006 by Pope Shenouda III and authorising His Holiness to take all legal and property measures on behalf of the Coptic Orthodox Church proves this fact. The contract covers the purchase of the entire area and buildings on plots no.122 and 123 of the division site map drawn by the Cairo Company for Housing and Construction. The purchaser confirms that he became the owner of the land at Masna al-Sharq St. in Ain Shams al-Gharbiya after he bought it from Ezzeddin Mohamed Abdel-Rahman according to a contract signed on 2 February 2005. The buyer acknowledges the land and building he received are free of any obligations restricting property rights, including mortgage, waqf, monopoly or usufruct. The contract cites no information whatsoever concerning any factory: no name, licence, tax card or the like. The contract proves what everyone in the neighbourhood already knows: the factory that occupied the building had been liquidated in 2000 and the licence was shifted to al-Obour City. The buyer thus received the land and a building free of any industrial activity.
• Once the purchase was finalised, the place was outfitted for prayers and three altars were built. The formal authorities approved the performance of religious rites there and Holy Mass was held for the first time on 23 November 2008—to coincide with the feast of Mar-Mina. On the evening of the same day, extremist Muslims attacked the church and demanded that it should be closed. Nobody then claimed it was any garment factory.
• Ever since, extremists spared no effort to hamper the activity or possible existence of a church. They hastened to erect a building in front of the church and built what they claim to be a mosque but is in fact a zawya, a Muslim “prayer corner” on the ground floor—Egyptian regulations ban the building of a church next to a mosque. The erection of the building is in itself illegal, since it is non-licensed and has violated the site division map through seizing six metres of public property. In 2008 alone, 16 demolition orders were issued for the building, but none was implemented. The zawya was opened in 2009 and prayers have been performed there since then.
• The decision to reopen the church was taken by the Minister of Interior Mansour al-Essawi following investigations by the ministry. Had there been any doubts regarding its legal status, the minister would not have decided to reopen the church. The demand made by some Muslims in the conciliation session to close the church to avoid the spilling of blood disregards the realities on the ground and infringes on the Copts’ right to perform their prayers. Rather than closing churches, preventing agitation against Copts and their churches is the easiest way to avoid the spilling of blood.
I am confident that publicising these relevant facts would pave the way for reopening the church of the Holy Virgin and Anba Abra’am in Ain Shams Gharbiya. I believe that the crisis generated by the reopening, which has grabbed public attention and encroaches on the citizenship rights of the Copts, has everything to do with the incessant attempts by some movements on the Egyptian political arena to hijack the 25 January Revolution to their own account.
Tweet
Author