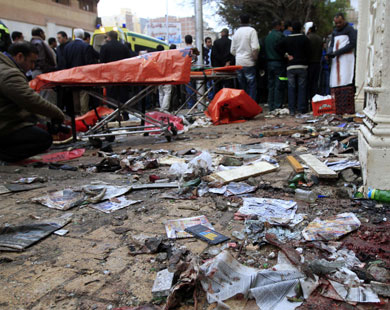 (AINA) -- The Egyptian attorney general has reopened the investigation into the bombing of the Two Saints Church in Alexandria on New Year's Eve, which killed 24 Copts and injured more than 90. On May 25 Coptic Church attorney Joseph Malak presented a petition to the Attorney General to reopen the investigations into the church bombing. The petition accused former Minister of Interior, Habib el-Adly, of criminal responsibility and collusion.

The Attorney General assigned the case to the Supreme State Security Prosecution to question the former Minister of Interior, who is presently in prison on other charges, including ordering the shooting of more than 900 protesters in Tahrir Square on January 28.
"We expect el-Adly to appear for interrogation before prosecution within the next few days," said Malak in an interview on Egyptian TV. He said that everyone was surprised when in mid April it was reported that all 20 Muslim suspects in the church attack were released and that they had been held as "political detainees."
The bombing of the church shocked Egypt and the world and brought international condemnation of Egypt, including from Pope Benedict, for not protecting its Christian minority against violence, especially as Egyptian churches had received repeated threats of retaliatory action from al-Qaida militants in Iraq, immediately after the massacre of 58 Assyrians at Our Lady of Deliverance Church in Baghdad.
In both the Iraq and Egypt attacks the reason was allegedly over female Christian-converts to Islam who were held against their will by the Coptic Church. The Coptic church has denied the accusation.
The lack of security forces guarding the threatened Egyptian churches was heavily criticized, especially as the security forces withdrew nearly one hour before the blast, leaving only four policemen and an officer to guard the church and nearly 2000 people attending the midnight mass. Coptic activists had called at the time for the resignation of Habib el-Adly, who was then Interior Minister, and pointed fingers at Muslim Salafists in Egypt (AINA 1-2-2011). Following this announcement and the arrest three weeks later of 20 suspects in the church bombing, a media blackout was imposed by the General Prosecutor's Office.
The church in Alexandria assigned Malak to pursue the case. "I had an unofficial meeting with the prosecution in Alexandria, requesting information on the decision to release the suspects in the church bombing, the disclosure of the investigations conducted with them, as well as the progress in the case and if it was still open."
Malak said he was stunned to learn the case had been "frozen" since January 25 and the file was transferred to the Supreme State Security Prosecution. Also, there were no accused, as previously claimed by the Interior Minister, and those who were detained were never investigated. "I was told by prosecution that they do not even have the names of the accused, and the only role they played was investigating the witnesses and the injured."
Malak said he sent a complaint to the Military Council, but never received a reply, so he approached the Attorney General.
"We believe the Interior Minister had a security breach and there was a certain security policy which was evident in this case." He added that after the Egyptian church got direct and clear threats from Al-Qaida in November 2010, the security forces should have been fully prepared for this threat.
On January 23, 2011, during Police Day celebrations, Habib el-Adly accused the Palestinian group Army of Islam, which has links to Al-Qaeda, of having masterminded the New Year's church attack in Alexandria, an accusation denied by the group. But the Interior Minister stood by his accusation and named an Egyptian, Ahmad Lotfi Ibrahim, of being the group's accomplice and who had admitted in writing to his involvement.
An Al-Qaida affiliated group calling itself the "Salafist Combat Group in Iraq" claimed responsibility for the Alexandria church attack. A statement from the group said that a combat battalion went from Iraq to Egypt to perform the operation in order to launch what they called "the release of Muslim captive women from the prisons of the Coptic Church." The group noted that one of its agents blew himself up.
"After the attack we got mixed messages," said Coptic activist Mark Ebeid, "was it a car bomb which detonated in front of the church or was it a suicide bomber? No one knows what happened."
The current Interior Minister, Mansour al-Issawi, ordered on June 1 the arrest of the main suspect in the church bombing, Ahmad Lotfi Ibrahim.
Tweet
Pope Shenouda Article