Court could move to Mubarak in Sharm 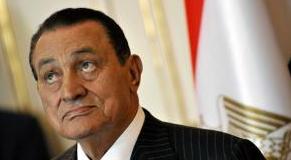 CAIRO - Former president Hosni Mubarak could stay in Sharm el-Sheikh where he is receiving medical treatment and the court that is going to try him could move to him there under certain conditions, according to Minister of Justice Mohamed Abdel-Aziz el-Guindi.

“This is possible if the accused’s health does not allow moving him or if security conditions do not allow the trial of the accused to be held in a certain place, and there are fear for his safety, or the safety of the witnesses or the jury or the defence,” el-Guindi told Akhbar el-Youm Arabic daily on Saturday. “It is up to the jury to assess the conditions and ask the Justice Minister to allow the court to be moved and try the suspect somewhere else,” he added. Minister el-Guindi has “utterly” rejected the threats from Sharm el-Sheikh residents who want Mubarak to be moved out of the city, warning that they will attack the hospital where he is staying and kill him, if he isn’t moved. He stressed that the State is able to provide security for each and every citizen and protect everyone’s life, “even if they have committed the most horrible crimes”. It was decided last week that Mubarak and his two sons, Alaa and Gamal, will be tried on August 3 on charges of ordering the killing of protesters and fraud. The Mubaraks will be tried by the North Cairo Criminal Court. Businessman Hussein Salem, a close associate of the Mubaraks, is to face trial on the same date on the same charges, a source said.