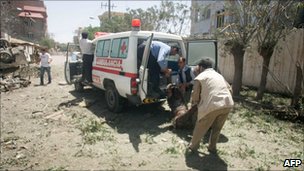 A suicide bomber has attacked the compound of a Nato-led reconstruction team in western Afghanistan, killing at least two people, officials say.

Several others were wounded in the assault on the Italian-led Provincial Reconstruction Team (PRT) base in the city of Herat.
A second blast was also reported elsewhere in the city, while witnesses said they heard gunfire at the site.
The Taliban recently declared a "spring offensive" of attacks in Afghanistan.
"At this stage, initial reports say that there has been an attack in the vicinity of the Herat PRT compound," a spokesman for the Nato-led International Security Assistance Force said from Kabul.
Television pictures from Herat showed at least two vehicles destroyed and troops scurrying for cover, Reuters news agency reported.
Tweet
Pope Shenouda Article