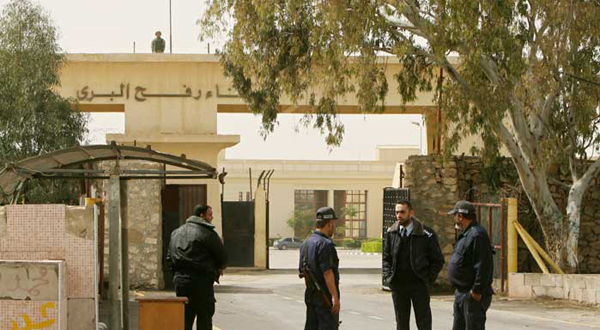 Arabi said in an interview with Al-Jazeera his country would take "important steps to help ease the blockade on Gaza in the few days to come," according to the Arabic-language satellite channel.
He said Egypt would no longer accept that the Rafah border — Gaza's only crossing that bypasses Israel — remain blocked, describing his country's decision to seal it off as "shameful."
In Jerusalem, a senior Israeli official said the Jewish state is "very concerned" about the implications of the Rafah crossing being thrown open.
Speaking on condition of anonymity, the Israeli official said Gaza's Hamas rulers had already build up a "dangerous military machine" in northern Sinai which could be further strengthened by opening the border.
"We are very concerned about the situation in northern Sinai where Hamas has succeeded in building a dangerous military machine, despite Egyptian efforts to prevent that," he told AFP, without giving further details.
"What power could they amass if Egypt was no longer acting to prevent that build up?"
Earlier this week, unknown assailants in northern Sinai blew up a gas pipeline supplying Israel and Jordan in what was the second time it had been sabotaged in 10 weeks.
It is still unclear who was behind the attacks, and the official would not be drawn on whether Israel was implicating Hamas.
But the fact that the new regime in Cairo was seeking to upgrade its ties with Gaza's Hamas rulers and was also seeking to better ties with long-time foe Iran, was an issue which could have strategic implications for Israel's national security, the source said.
"We are troubled by the developments in Egypt, by the voices calling to annul the peace treaty, by the rapprochement between Egypt and Iran, and by the upgrading of relations between Egypt and Hamas. These developments potentially have strategic implications for Israel's national security."
The move was announced a day after Hamas reached a surprise reconciliation deal with its Fatah rivals which control the Palestinian Authority, in a development which stirred anger and concern in Israel.
"The recent developments have been very worrying," he said, without elaborating.
Palestinian officials welcomed the move, with chief negotiator Saeb Erakat saying it was one step towards loosening the siege on the Gaza Strip.
"We welcome this step by Egypt. We have been pressing them all the time to end the suffering of the people in Gaza, but the real siege is caused by Israel because there are many border crossing with Israel but only one with Egypt," he said.
"We ask Israel to open all the borders to end this crime against the Palestinian people in the Gaza Strip," he told AFP.
Hatem Ewidah, the Hamas official in charge of border crossings in Gaza, also welcomed the move, but stressed it was "important to open the commercial cross with Egypt" in order to reduce the impact of the blockade.
The Rafah border is the only way in and out of Gaza which does not pass through Israel.
It has remained largely shut since June 2006 when Israel imposed a tight blockade on the territory after militants there snatched Israeli soldier, Gilad Shalit, who is still being held.
The blockade was tightened a year later when Hamas seized control of the territory, ousting forces loyal to the Western-backed Palestinian Authority.
Egypt has actively supported Israel's blockade, frequently coming in for harsh regional criticism for keeping the border closed and for building an underground wall in a bid to curb smuggling, which it views as a security risk.
But earlier this year, mass street protests in Egypt led to the overthrow of president Hosni Mubarak, with the new military regime keen to review its policy on Gaza.
Opening the border without any international supervision is likely to be a breach of 2005 agreement between Israel and Egypt which was brokered by the United States.
Under terms of the deal, the crossing would be under Egyptian and Palestinian control, with European observers and Israeli camera surveillance.
Israel fears that an open border would allow the free passage of weapons and personnel into Gaza, a stronghold of militant factions bent on attacking the Jewish state.
Tweet
Pope Shenouda Article