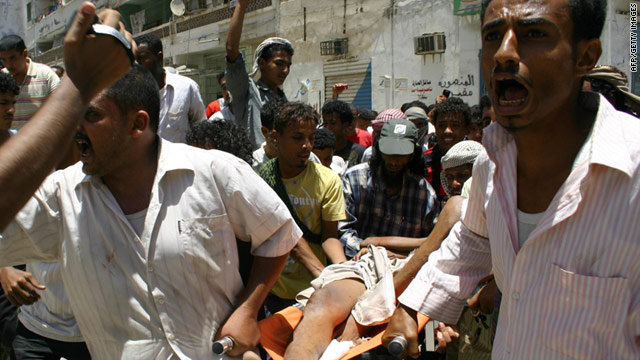 (CNN) -- Yemen's president says he won't leave the country to sign a hard-fought political deal because he fears his departure could spark a coup, a senior ruling party official told CNN on Saturday.

The stance threatens to collapse an agreement brokered by the six-nation Gulf Cooperation Council to end the violent political standoff across Yemen, still reeling this week from one of the deadliest days in months of protests that have pitted demonstrators against President Ali Abdullah Saleh.

Saleh wants his adviser to go in his place to Saudi Arabia and sign the agreement on his behalf. But that's a no-go for the country's opposition, which is threatening to back out of the GCC accord if Saleh does not personally ink the arrangement.

"Saleh feels that a planned coup would take place if he leaves the country," according to the senior ruling party official, who did not want to be identified because he was not authorized to speak about the matter.

"We do not feel it is for the best of Yemen's interest that Saleh attends the signing in Riyadh. Saleh is a member of the ruling party and has the right to send members on his behalf," the source said.

GCC's secretary-general Abdullatif Al-Zayani arrived in the Yemeni capital of Sanaa on Saturday, according to Tareq Shami, spokeman for the ruling General People's Congress,

The source in the ruling party said Saleh will work to convince Al-Zayani "that it will be fine for a delegation to go on his behalf to Riyadh."

This development comes as the massive countrywide protests that started in February continue to shake the impoverished and politically unstable nation.

Saleh's unpopular government has been aligned with the United States in the fight against al Qaeda militants and he has been trying to link his political opponents to terrorism. On Friday, the state-run news agency SABA said police killed an al Qaeda militant with ties to elements of the opposition Joint Meeting Parties.

Hundreds of thousands of anti-government protesters poured out into the streets of at least 13 of the country's provinces on Saturday, all demanding Saleh step down immediately.

The GCC deal attempts to address the discontent. Saleh and the Yemeni opposition have previously agreed to the deal in principle.

It stipulates that Saleh agree to transfer power and leave office within 30 days of doing so, and provides immunity for him and those who served in his regime. It also calls for a unity government to be formed within seven days.

Shami on Saturday confirmed a GPC delegation would go to Saudi Arabia's capital soon to sign the agreement, but he said that Saleh would not be among the attendees or the signatories.

"The ruling party delegation heading to Riyadh will be headed by President Saleh's advisor, Abdulkareem Al-Eryani," said Shami, adding that Al-Eryani would sign the GCC-brokered accord on behalf of the president and the rest of the ruling party.

Mohammed Qahtan, spokesman for the Joint Meeting Parties, said, "We will not accept to sign the GCC proposal unless Saleh signs it, and not anyone on his behalf."

The GCC is made up of Bahrain, Kuwait, Oman, Qatar, Saudi Arabia, and the United Arab Emirates.

On Thursday, Yemen's opposition issued a statement warning that "massacres" against street protesters could derail the deal.

It came a day after 13 anti-government protesters were killed in Sanaa and another was killed in Aden province after protesters were attacked by security forces, the opposition said. More than 100 others were wounded.

"We accepted the Gulf proposal to avoid the spilling of Yemeni blood, but if killing does not stop, we will continue the revolution and the government will never be forgiven for the massacres against the people," the opposition said in a statement.

"It seems that the Saleh regime is using the GCC proposal to kill people and spill the blood of Yemenis. We will not accept the proposal if the violence doesn't immediately end."