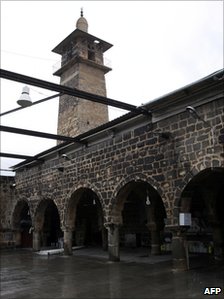 The army has seized control of a mosque which had become a centre for anti-government protests in the southern Syrian city of Deraa, witnesses say.

Soldiers are now stationed on the roof the Omari mosque in the city centre, after an assault supported by tanks. Activists said six people were killed.
On Friday, they reported that at least 66 protesters were killed across Syria - more than half of them in Deraa.
Officials said the number of dead was far lower, and included four soldiers.
State television said security forces had come under attack by "armed terrorists" in Deraa and Homs, Syria's third city.
'Operations intensifying'
Foreign journalists are not being allowed into the country, and the exact picture of what is happening remains unclear.
However, residents of Deraa said the assault on the historic Omari mosque involved troops backed by tanks and heavy gunfire. It took about 90 minutes for the army to gain control, they added.
"The shelling has stopped. There are snipers on the roof of the mosque," one man told the Reuters news agency, adding that forces appeared to be in control of the city's old quarter for the first time.
Earlier, another resident, Abu Ahmed, said: "It looks like [the security forces] want to finish their campaign today. From the new tank deployments, it looks as though they are intensifying their operations."
The Omari mosque has been a focus of the protests in Deraa since mid-March.
People frequently gathered there to demand political freedom and, more recently, the end of President Bashar al-Assad's rule.
Human rights activists said at least at least six people had been killed on Saturday. One said they had been shot by snipers.
Activists said some 40 people were killed in Deraa on Friday.
With no-one allowed to hold funerals in the city - even going out to pray has been banned - bodies are being stored in makeshift morgues. Unverified video footage showed fully-clothed bodies piled inside a large vegetable freezer.
'Breaking the siege'
The authorities have told relatives of those killed in other parts of Syria to keep the funerals small and personal.
In the past that has not prevented sympathisers turning out and chanting slogans against the regime, says the BBC's Jim Muir in Beirut.
Websites supporting the uprising in Syria have said the bloodshed will only increase the resolve of the protesters to see through the mission of those who have fallen, our correspondent says.
They have called for a "week of breaking the siege" - a reference to the dire situation in Deraa, which has been in the grip of a crackdown by troops and tanks for the past six days, he adds.
They are planning demonstrations in different parts of the country everyday, culminating in nationwide protests at the end of the week.
Deraa has been without electricity, water and telephone lines since Monday.
Unconfirmed reports said some soldiers had deserted and were taking refuge with locals after refusing to fire on protesters in Deraa.
In a separate development, 138 members of the ruling Baath Party in the southern Hawran region, in which Deraa is located, resigned on Saturday in protest against the crackdown, activists said.
Earlier this week, another 200 Baath Party members in Deraa governorate resigned.
The UK-based Syrian Observatory for Human Rights says 539 people have been killed nationwide since protests began on 15 March.
President Bashar al-Assad's government blames extremists for the unrest, which it says have left nearly 80 security personnel dead.
On Friday, the UN Human Rights Council condemned violence, in a US-led resolution by 26 votes to nine with seven abstentions.
UK Foreign Secretary William Hague welcomed the resolution on Saturday and voiced alarm at the reports of hundreds of deaths.
"The Syrian government has failed to heed repeated calls by the international community for restraint," he said in a statement.
"It is vital to respond with reform not repression."
Tweet
Pope Shenouda Article