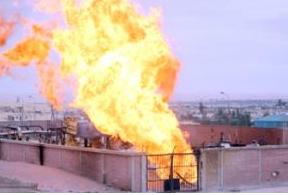 The attack took place at dawn near the village of Al-Sabil in the El-Arish region, the security official said, adding that the bomb was activated remotely.

MENA said armed forces rushed to the scene but so far had failed to control the fire. It quoted locals as saying that they heard a "huge" explosion followed by a massive fireball. There were no reports of casualties.

A spokesman for the Israeli Ministry of National Infrastructures when asked by AFP refused to confirm whether gas supply to Israel had stopped after the blast.

The pipeline was previously sabotaged on February 5 during a popular uprising that forced former Egyptian president Hosni Mubarak from power on February 11.

Supplies of gas to Israel and Jordan from that disruption resumed eventually on March 16.

At the time, Israeli Infrastructures Minister Uzi Landau said that "gas is the most important economic component of the peace treaty between the two countries" signed in 1979.

Egypt supplies about 40 per cent of Israel's natural gas which is used to produce electricity.

To compensate for the interruption of supplies of Egyptian gas, the Israeli authorities had previously authorised the use of thermal pollutants, including oil, to avoid blackouts.

In April, after the ouster of Mubarak, the Egyptian military council which is running the country, has ordered a review of all gas supply agreements, including those with Israel which were widely criticised by the opposition.

Several former members of Mubarak's ousted regime, including two ministers, are to be tried for allegedly selling gas at prices below market to Israel.

Egypt was the first Arab country to have signed a peace treaty with Israel, a move hailed by the international community, but unpopular among the Egyptian people who are very critical of the Israeli policy towards the Palestinians.

Jordan imports around 240 million cubic feet of Egyptian gas a day, or 80 percent of its electricity needs.

The previous disruption cost the Jordan economy some $4.2 million a day, Energy Minister Khalid Tuqan said at the time.

An armed Bedouin group in June threatened to attack the pipeline, security officials said, leading Egyptian authorities to beef up security around the pipeline and terminal.

Police relations with the region's former nomads are often tense, with the Bedouin complaining of routine harassment and discrimination.

Activists accuse the police of exploiting concerns about the pipeline to crack down on the community.

Human rights groups have criticised Egyptian policy towards the Bedouin, who faced harsh police treatment after a series of bombings in Sinai resorts between 2004 and 2006 which killed dozens of Egyptians and foreign tourists.

Characters of the Holy Bible

Lessons from the Lord's Resurrection So many miracles happened at the time of the Lord's crucifixion: there was darkness over all the land, the veil of the temple was torn in two, the earth quaked, and the rocks were split, and the graves were opened; but did everybody benefit from these lessons? HAPPY EASTER Jacob the Patriarch (8) Back to his home country & wrestling with his uncle Laban