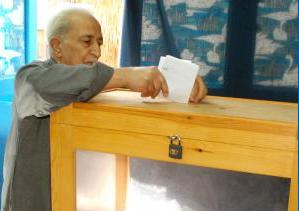 CAIRO - Egyptians went to the polls on Saturday to decide on a package of constitutional amendments which aim to pave the way for the parliamentary and presidential polls during the transitional period.

The changes were completed in 10 days by a committee appointed by the country's supreme military council. An estimated 45 million eligible voters are urged to participate.
The changes were made to nine articles of the constitution which was suspended on Feb. 13 by the country's supreme military council which took power after the resignation of former President Hosni Mubarak.
The following are the major amendments:
* The presidency will be shortened to four years with a limit of two terms. Previously, the term of presidency was six years with no actual limit on terms.
* The presidential candidate must either get support of 30 elected members of parliament, or 30,000 eligible voters across about half of the country's governorates, or be nominated by a registered political party with at least one seat in either houses of parliament.
Previously, independent presidential candidates must have recommendations of at least 250 members of the elected seats of parliament, or be a senior member of a registered party with at least 3 per cent of the total of seats in each of the houses of parliament. The strict rules had made opposition parties very difficult to meet the requirements for fielding a presidential candidate.
* The president should nominate one or more vice presidents within 60 days of being elected. Perviously, the president may nominate one or more vice presidents without deadline such as the proposed 60 days.
* Complete judicial supervision will be placed on all elections and referenda. Previously, a supreme commission characterized by independence and impartiality supervise the elections as regulated by law.
* The duration of the emergency period shall be restricted to no more than six months, which can only be extended by approval in a popular referendum. Previously, the constitution only said a limited period of time for the state of emergency and that its extension needed the approval of the People's Assembly (Upper House of Parliament).
* One article about anti-terrorism was proposed to be eliminated.
* The Supreme Constitutional Court has the authority to decide on the appeals against legality of parliament membership. Previously, the People's Assembly is the only authority to decide on this matter.
* Amendments to the constitution are to be requested by the president or at least half of the members of the both houses of parliament. Previously, the amendments may be requested by the president, or at least one third of the People's Assembly members.
Tweet
Pope Shenouda Article