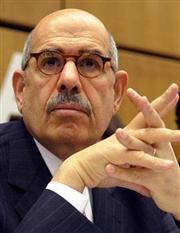 The Director General of the International Atomic Energy Agency Mohamed el-Baradei announced that he may run in the 2011 Egyptian presidential elections, but insisted there would have to be "built-in guarantees" that the election would be free and fair.
El-Baradei's announcement elicited varied responses from the Egyptian people. Some saw it as an "embarrassing message" from a figure with considerable international clout. The message implies the devolution of power in Egypt needs to be reconsidered, particularly since nominations for the presidency are severely restricted by the regime and the ruling party. Others saw it as a genuine effort to revitalize a repressed political life.
Yehia el-Gamal, the renowned constitutional law expert, saw el-Baradei's announcement as a "decent rejection" of the Egyptian Constitution's stand on presidential elections. El-Baradei wanted to say, that although he is an Egyptian who places a high value on people's trust in him, he cannot run for president because he needs guarantees that do not currently exist, he added.
Every channel that a nominee like el-Baradei can use to run in the presidential elections seems to be blocked, either by the Party Affairs Committee, or the leaders of the National Democratic Party and its members in parliament, said Abdel Halim Qandil, general coordinator of the Kefaya Movement and one of the coordinators for the Egyptian Coalition for Change. This, he adds, should ruin el-Baradei's chances of running for elections, or render it a nomination in name only.
Negad el-Baradei, a rights activist, specified several steps that el-Baradei could take to nominate himself for presidential elections. The most important of these steps would be to join the Wafd Party and form an independent national committee to manage the elections, without interference by the state.
Meanwhile, Hassan Nafaa, a political science professor at Cairo University, welcomed el-Baradei's announcement and affirmed that if he did actually run for elections, he would embarrass the regime.
Members from the Wafd Party differed in their opinions. While Fouad Badrawi, vice president of the Wafd Party, denied that el-Baradei would be the party's nominee if he joined, Mostafa el-Taweel, the party's ceremonial president, welcomed el-Baradei's nomination.
Translated from the Arabic Edition