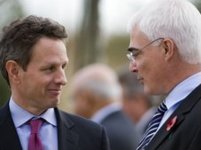 Finance ministers from developing and rich countries meeting in Scotland have pledged to keep stimulus measures in place until global recovery is assured.

A statement issued after the G20 meeting says the recovery is "uneven" and remains dependent on support, while unemployment is a "major" concern.

Earlier, British PM Gordon Brown called for a fund for bank bailouts, possibly paid for by a tax on transactions.

But the proposal received a lukewarm response from other G20 countries.

After the meeting in St Andrews, US Treasury Secretary Tim Geithner said there was a "very broad consensus that growth remains the dominant policy imperative across our economies".

British Chancellor of the Exchequer Alistair Darling said that although the threat of a downturn had receded, it was too early to withdraw emergency support.

"There is no one who believes the job is yet done," he said.

The G20 statement said: "The recovery is uneven and remains dependent on policy support, and high unemployment is a major concern.

"To restore the global economy and financial system to health, we agreed to maintain support for the recovery until it is assured."

The BBC's Andrew Walker at the meeting says it was overshadowed by a call by the British prime minister for a new "social contract" with banks to make them more responsible to society.

Mr Brown said the financial sector was so key that governments had no choice but to step in when it failed.

He added: "And it cannot be acceptable that the benefits of success in this sector are reaped by the few but the costs of its failure are borne by all of us."

Mr Brown said a global levy on financial transactions was one of the ways to make banks pay, but said the UK would not introduce such a tax unless other countries did so as well.

Other options, he said, were an insurance scheme, a global "resolution fund" or a contingent capital arrangement.

The UK has in the past been opposed to transaction levies, known as Tobin taxes, believing they could damage the interests of the City of London.

Our correspondent says the UK proposal has been received politely by the finance ministers - but several made remarks which suggest that other ways of tacking the problem are rather more likely to be adopted.

The British Bankers' Association has also cast doubt on the effectiveness of such financial transaction levies.

The G20 countries also promised to step up efforts to tackle climate change and "work towards an ambitious outcome" at next month's climate conference in Copenhagen.