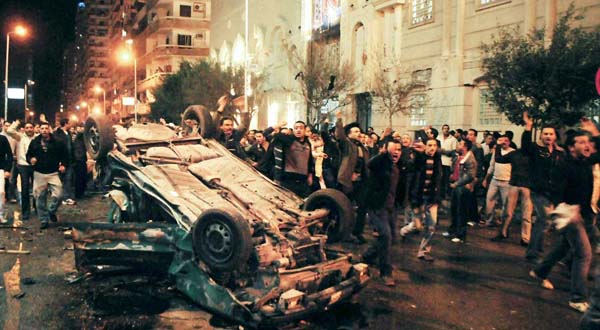 CAIRO: A car exploded in front of a Coptic Christian church as worshippers emerged from a New Year's Mass in the Egyptian city of Alexandria early Saturday, killing at least 21 people, officials said.

After the blast, enraged Christians emerging from the church clashed with police and stormed a nearby mosque, prompting fights and volleys of stone throwing with Muslims, police and witnesses said — a sign of the sectarian anger that has been arising with greater frequency in Egypt.
Nearly 1,000 Christians were attending the Mass at the Saints Church in the Mediterranean port city of Alexandria, said a priest at the church, Father Mena Adel. The service had just ended, and worshippers were leaving the building when the blast went off, about a half-hour after midnight.
"I was inside the church and heard a huge explosion," Adel told The Associated Press. "People's bodies were in flames."
The blast came from a car parked outside the church, but police said they were still investigating whether the car had been rigged with explosives or if a bomb had been placed under it. Witnesses reported seeing the charred chassis of the destroyed car, with the remains of several bodies nearby and dozens wounded.
The Interior Ministry originally said in a statement that seven people were killed and 24 wounded. Senior Ministry of Health official Osama Abdel Moneim later raised the toll to 21 after more bodies were transferred to hospitals.
There was no immediate claim of responsibility for the blast. Labib immediately blamed Al-Qaeda, pointing to recent threats by the terror group's branch in Iraq to attack Christians. It was not clear, however, if Labib had firm evidence, and he may have intended more to deny any homegrown Muslim-Christian tensions in Egypt.
"The Al-Qaeda organization threatened to attack churches inside Egypt. This has nothing to do with sectarianism," he told state TV.
President Hosni Mubarak sent his condolences to the victims’ families, asking Egyptians to stand united against terrorism.
Al-Azhar also condemned the attacks in a statement early Saturday. Al-Azhar spokesperson Refa’a El-Tahtawy asked Muslims and Christians to remain rational and calm and to ignore provocations.
After the explosion, some Christians from the church clashed with police in anger over the blast. The Christians hurled stones at police and a nearby mosque, chanting, "With our blood and soul, we redeem the cross," the witnesses said.
An AP photographer at the scene said the protesters stormed into the mosque, throwing books inside out onto the street. The protest sparked clashes with Muslims, as both sides began throwing stones and bottles at each other in the streets.
The attack comes at a time of rising sectarian tension in Egypt and the broader region. In November, hundreds of Christians rioted in the capital, Cairo, smashing cars and windows after police violently stopped the construction of a church. The rare outbreak of Christian unrest in the capital left two people dead.
Christians are believed to make up about 10 percent of Egypt's mainly Muslim population of nearly 80 million people, and they have grown increasingly vocal in complaints about discrimination. There have been occasional attacks targeting Christians — most notably, in January 2009, seven Christians were killed in a drive-by shooting on a church in southern Egypt during celebrations for the Orthodox Coptic Christmas. The Saints Church in Alexandria targeting early Saturday also came under attack in April 2006, when a man with a knife stabbed worshippers.
At the same time, Al-Qaeda-linked militants have carried out a campaign of attacks against Christians in Iraq, killing 68 in a church siege in October and two more Christians in attacks in Baghdad on Thursday.
The attacks in Iraq have an unusual connection to Egypt. Al-Qaeda in Iraq says it is carrying out the campaign of anti-Christian attacks in the name of two Egyptian Christian women who reportedly converted to Islam in order to get divorces from their husbands. The Coptic Church forbids almost all divorce, meaning leaving the religion is sometimes the only option to escape an abusive or unhappy marriage.
The two women have since been secluded with Coptic Church authorities. Islamic hard-liners in Egypt have held frequent protests in past months, accusing the Church of imprisoning the women and forcing them to renounce Islam and return to Christianity.
Al-Qaeda in Iraq says it is carrying out attacks on Christians in that country until Egyptian Church officials release the two women. The Church denies holding the women against their will. –Additional reporting by Daily News Egypt
Tweet
Pope Shenouda Article

A way that seems right is a hindrance to virtue

A verse repeated twice in the Proverbs due to its important says, "There is a way that seems right to a man, but its end is the way of death." (Prov 14: 12; 16: 25) It probably means that a person should not rely on his own view and understanding of matters, for he may be wrong or think a certain way good, while it is harmful. Therefore, "Lean not on your own understanding" (Prov 3: 5), nor lay your whole trust on yo