Tension in Egypt over attacks on Coptic Christians

Egypt's Coptic Christian community are upset over what they perceive to be organised attacks against them in the north of the country.

Security officials said a large crowd of Christians gathered in front of a church on Wednesday to protest the apparently orchestrated attacks in al-Bagur in Manufiya province, in which one Coptic Christian was killed and two others stabbed. 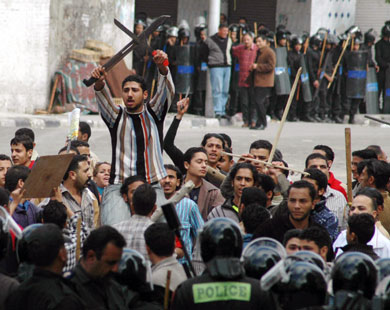 Archbishop Stefanos, head of the Mar Girgis (St George) Coptic Church in al-Bagur was quoted by German press agency DPA as saying, “There is anger among the Christians because they feel their blood has been made cheap.”

The Archbishop told DPA that a man repeatedly stabbed local shopkeeper George Abdu, 63, in the abdomen and the neck, killing him, then fled on a Harley-Davidson motorcycle.

The killer then drove four kilometres to the village of Bamahai where he repeatedly stabbed a cobbler before driving to another village, Mit Afifi, where he stabbed a third Christian man. They are still in hospital, said Stefanos.

Coptic Christians make up about 10 per cent of the population in Egypt. They have often complained of discrimination and such attacks have only increased their hostility towards the government for failing to stop them.

Until recently, Egyptian law barred Christians constructing or fixing churches unless they received a permit from the president.