New round in UNESCO vote as Egyptian misses majority

Egypt's controversial candidate for UNESCO director general failed to win an absolute majority in a ballot of world envoys yesterday, with the vote now set to head to a third round, a spokesman said. 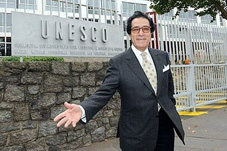 Koichiro Matsuura as director general, with the Faruq Hosni seen as the frontrunner. One of nine candidates, Hosni fell short of the 30 votes needed to win election, and a third ballot was set for Saturday, the UNESCO spokesman said. According to a diplomat at the organisation, the 71-year-old Hosni secured 23 of the votes from UNESCO's 58-nation executive council. Hosni nevertheless held a comfortable lead over his three nearest rivals: European Commissioner for External Relations Benita Ferrero-Waldner with nine votes, Bulgarian ex-foreign minister Irina Bokova, who won eight, as did Ecuador's Ivonne Baki. The Egyptian is seeking to become the first representative from the Arab world to head the UN agency mandated to promote global understanding through culture, education and science. Supporters say the Egyptian's election would send a positive signal from the West to the Muslim world, but the race has been clouded by charges that anti-Israel comments made last year make him unfit for the role.