Mexican authorities deployed more than 1,000 additional police officers to reinforce security at the capital's 175 subway stations on Saturday, a day after a shooting inside a station left two people dead and eight injured at the height of evening rush hour.

The shooting at the Balderas station in central Mexico City happened after police stopped Luis Felipe Hernandez Castillo, 38, from writing graffiti on the wall of one of the subway platforms. 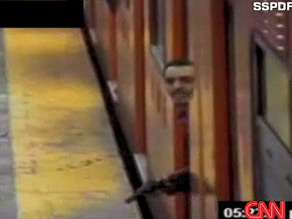 ied to stop him, Hernandez Castillo drew a .38 special handgun and began firing.

Mancera said his first impression of Hernandez Castillo is that he may suffer from mental illness.

"One moment he is talking about global warming and then about the message of the Bible and suddenly he focuses on some government," Mancera said.

Authorities identified Hernandez Castillo as an agriculturalist from the state of Jalisco.

Hernandez Castillo also told investigators that he believed a great famine would come, and he traveled to Mexico City to relay a message, Mancera said.

Earlier this month, a Bolivian pastor hijacked a passenger jet in Mexico City with a fake bomb, claiming that he acted on a divine revelation to warn people of a forthcoming earthquake.

Mancera said Hernandez Castillo was aware of the hijacking, but that the two events were not connected.

Hernandez Castillo said he opened fire because he saw the police as a threat to his task of writing on the wall, Mancera said.

Preliminary tests show that Hernandez Castillo was not under the influence of alcohol or drugs during the incident, Mancera said.

The Mexican government on Saturday posted security camera footage of the shooting. It shows a busy subway platform as the train pulls into the station just before 5:15 p.m. Friday. As the train comes to a stop, there is a disturbance in the crowd, and Hernandez Castillo is seen shooting at an officer. Watch the dramatic incident unfold »

The crowd disperses, and the officer runs out of view of the camera. The officer, who was a bank policeman, is later seen on the footage lying dead, face down on the platform.

The man is on the floor facing Hernandez Castillo, about to get up and try to grab him, when he is shot in the head and falls to the ground.

Mancera initially said the man was a federal security agent in plain clothes, but later clarified that the man was a civilian, a 58-year-old construction worker.

A scattered handful of people remain on the subway platform during the shooting. Some stay on the train. Others walk on the platform very close to the shooter, seemingly undisturbed.

Seven minutes later, the camera pans out to show the construction worker lying on his back and the bank police officer in the foreground. Hernandez Castillo remains on the train, occasionally firing his gun and peeking out of the train.

At 5:23 p.m., the camera shows first one, then two, then three plain-clothes police getting into position on the platform. Within moments they rush Hernandez Castillo and pull him out of the train, with nearly a dozen police officers then wrestling him to the ground.

Hernandez Castillo was treated at a hospital for a bullet wound to the right shoulder before being transferred to the local attorney general's office, a common place to hold prisoners during preliminary investigations, a spokesman for the attorney general said.

He faces two counts of murder and one count each of attempted murder, aggression, resisting arrest and disturbing the peace, said the spokesman, who declined to be named because he is not authorized to speak to the press.