Problems on hold:Bombshells of fanaticism

The bombshells of fanaticism keep on dropping. Amid the explosions and moral carnage several questions beg answers. Why now? In whose interest is the confusion and efforts to disintegrate the national front? How can this serve the causes of national rapprochement and enlightenment? As these questions and others go unanswered, countless Muslims fall prey to fanatic thought, believing that they are thus being faithful to their religion.
This month of Ramadan has seen two such bombshells drop, with tremendous damage in their wake. The first is concerned with an official fatwa (Islamic legal opinion) stipulating that it is a sin for any Muslim to donate money, or write part of his or her money in a will, to be used to build a church. The problem lies not in the direct ban on helping to build churches, but in the fact that the church was grouped within a collection of iniquities banned by God. This brought on a wide wave of criticism, beginning with Christian protest and ending with censure by the grand sheikh of al-Azhar, Sheikh Sayed Tantawi, who rejected the fatwa outright. 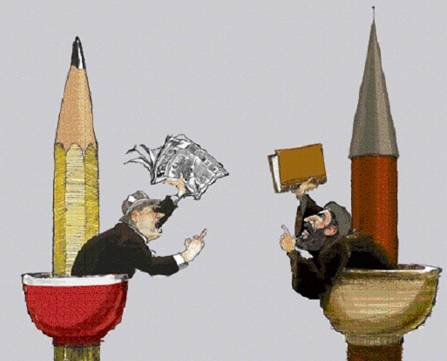 Granted, the ending was a happy one. But the damage had already been wreaked on the national front; social peace had been upset; a problem had been unnecessarily created. It would have been much more constructive to publicise the many instances in which Muslims had donated money to churches and Copts to mosques, the result being the fostering of social compassion and solidarity to build the nation. In this respect, I received the following letter from one of our regular readers in Qoussiya, Assiut, Sheikh Ali Hairous. “ The fatwa which bans Muslims from donating money to churches produces nothing but increased sectarian tension and tears apart the national fabric. I wish those in positions of responsibility would refrain from trifling with religions. The church carries the same mission as the mosque; both are places of worship and guidance. How could a fatwa place churches on the same footing as sites of evildoing? Were not many of our mosques built with donations from Christians? Is it a sin to pray in them now?”
The second bombshell was the arrest of some 155 individuals, mainly in the governorate of Aswan, for breaching the Ramadan fast. The move calls to mind the religious zealousness we hear of in some of the Gulf states but never existed in Egypt—an old land famous for its civilisation and culture of tolerance. I know nothing about what religion those arrested belong to; it makes no difference whatsoever. Our security officials behaved as though they were the self-appointed guardians of faith, their mission being to search consciences and enforce religious rituals. This is at best an outrageous departure from their original role of law enforcement; Egypt’s Constitution and laws include nothing about criminalising or penalising violators of Ramadan fast.
The arrests are unprecedented in Egypt where Muslims may differ over the fast, one or another of them may take offence if another Muslim is not fasting, some may even reproach a Christian for eating or drinking before them during the fast. It may do well in this context to hint that fasting is about far more than matters of food and drink; it should lead to an elevated spiritual sense. But in the end it has customarily been a matter of personal freedom. This is why it is unacceptable, unimaginable, and unconscionable that an executive authority should take it upon itself to act as the self appointed guardian of virtue, deciding who is good and who is not, and penalising who it sees fit.
Some have described the situation as heralding in the “Aswan Islamic Republic”, but I say it is “Taliban, Egypt branch”. But the real catastrophe is the official silence, beginning with the security heads in Aswan and up to the political and religious leaderships in Cairo. It sends a clear message to the man in the street that the arrests were not wrong, even if unfortunate.