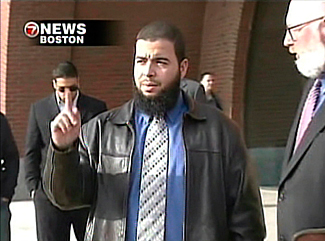 Boston - Tarek Mehanna actively tried to become a terrorist for eight years following the 9/11 attacks, US authorities allege. Arrested by the FBI Wednesday and charged with providing "material support" to terrorists, his history and footsteps took twists that led his group of three conspirators as far afield as Pakistan, Yemen, and Somalia, according to a criminal complaint filed in US District Court.

What follows is a time line of Mr. Mehanna's and his group's alleged actions from before the 9/11 attacks in 2001 up to 2008, according to the FBI's complaint and an affidavit supporting a search warrant:

• 2000-2001 – Tarek Mehanna, who has known "CW2" (a conspirator who in late 2006 agreed to cooperate with the FBI) for 15 to 20 years, introduces him to Ahmad Abousamra, and the three men become close friends. Common interests include talking about religion and Muslims' role in the United States and justification for certain jihadist acts.

• Pre-Sept. 11, 2001 – Mehanna, Abousamra, and CW2 talk about going to terrorist training camps in Pakistan, searching the Internet for logistical information for locations and travel, but no solid plans materialize.

• Fall 2002 – Mehanna meets Daniel Maldonado through Abousamra. At Mehanna's home, they watch jihadi videos showing pillaging of the Muslim world in Bosnia and the Palestinian territories. Later, the video shows mujahideen victories and footage of people being killed. Afterward, Mehanna, Abousamra, and Maldonado talk about the glory of dying for Allah.

• Nov. 17, 2002 – Abousamra travels again to Pakistan, where he connects with a man who helps him find a Taliban camp and another run by a Lashkar e Tayyiba group. But, as he later tells CW2, he was rejected by the former for being too inexperienced and by the latter for not being Pakistani.

• 2003 – Mehanna, Abousamra, and CW2 determine Pakistan is not a feasible place to get terrorist training. Frustrated, they begin exploring other options, including committing domestic terrorist acts. One topic of discussion: the feasibility of shooting a member of the executive branch of government. In another discussion, killing a second member of the executive branch is debated.

• Second half of 2003 – Inspired by the 2002 sniper attacks in Washington, D.C., Mehanna, Abousamra, and CW2 discuss a plan to get automatic weapons, go to a shopping mall, and randomly shoot people. Abousamra says civilians aren't innocent because they pay taxes to the government and because they are Kufar (nonbelievers).

• October 2003 – Abousamra flies to California to meet with "Individual A," who tells him whom to see and where to go to find terrorist training camps in Yemen.

• Late 2003 – Discussion of the mall attack plan continues, including types of weapons needed, number of attackers involved, and coordinating the attack across different entrances. Attacking emergency responders is debated. CW2 travels to New Hampshire to meet with Maldonado, a former gang member, who is believed to have access to automatic weapons. But Maldonado says all he can get is handguns. Lacking firepower, the plan is abandoned.

• Late 2003 – Mehanna, Abousamra, and CW2 begin planning a trip to Yemen to attend a jihadist training camp or training in southern Jordan. Traveling to Iraq is discussed and of particular interest because of the opportunity to fight US forces and because it is more accessible than other jihad conflicts around the world.

• February 2004 – CW2 hides video of his actions that he expects to tell family about later by e-mail. Mehanna, Abousamra, and CW2 debate the permissibility of suicide bombings. Abousamra agrees. CW2 does not; he and Mehanna want to be soldiers for jihad, not suicide bombers.

• Feb. 4, 2004 – Mehanna, Abousamra, and CW2 pull together $13,000 and travel to Yemen seeking admission to a terrorist training camp. They divide the cash three ways to avoid currency reporting requirements. They also discuss a cover story to tell authorities in case they are questioned: that they are attending religious study at Dar al Mustafa school, a Yemeni school they found online. None of the three makes contact with the school. On arrival in Yemen, checking e-mail, CW2's family tells him to return, and he does. Mehanna and Abousamra continue on.

• Feb. 4-10 2004 – Mehanna and Abousamra travel Yemen looking for the people "Individual A" told them to meet. According to a later recorded conversation between Mehanna and CW2, Mehanna explains that they met a huge man, with long hair and long beard, wearing a turban. Another man with him tells them concerning training camps that "all that stuff is gone ever since the planes hit the Twin Towers."

• Feb. 11, 2004 – Mehanna and Abousamra leave Yemen for United Arab Emirates (UAE). Abousamra goes on to Jordan and, two days later, enters Iraq, where he is thought to stay about 15 days. Mehanna returns home.

• Summer 2006 – Mehanna visits Egypt and meets with Maldonado, who moved there.

• Aug. 10-11, 2006 – FBI agents search Mehanna's bedroom and copy the hard drive of Mehanna's laptop computer on authority of the Foreign Intelligence Surveillance Court. Forensic analysis shows many gigabytes of data, including hundreds of megabytes of data with evidentiary value, including video, audio, and image files, as well as documents and stored messages. Mehanna's online identities and websites are revealed, along with a February 2006 discussion in which Mehanna and another discuss their desire to be the "media wing" for Al Qaeda in Iraq.

Agents also discover that Mehanna has translated from Arabic to English, and then published on a website, a tract entitled: "39 Ways to Serve and Participate in Jihad." Another picture from the hard drive shows Mehanna at ground zero in New York, smiling and pointing to the sky.