CAMBRIDGE, Mass. – President Barack Obama said Friday that opponents of his energy bill are disputing the evidence of global warming in a cynical ploy to undermine efforts to curb pollution and steer the nation to greener energy sources. 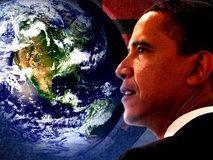 Obama said some opponents "make cynical claims that contradict the overwhelming scientific evidence when it comes to climate change — claims whose only purpose is to defeat or delay the change that we know is necessary."

He also appeared to be taking on chief critics like the U.S. Chamber of Commerce and National Association of Manufacturers, though not by name.

"There are those who will suggest that moving toward clean energy will destroy our economy, when it's the system we currently have that endangers our prosperity and prevents us from creating millions of new jobs," Obama told his audience at the Massachusetts Institute of Technology.

Using familiar refrains from his campaign and his administration as Congress mulls its next move on the climate bill, the speech was designed as a nudge for lawmakers to act on a top priority of the president's.

Next week, the Senate environment committee will take up its version of a global warming bill. The legislation would cut greenhouse gases by about 80 percent by 2050 — as the president called for in his campaign — and require more domestic energy to come from renewable sources such as wind, solar and hydropower. The House passed a similar bill in June.

The two business groups to which Obama alluded oppose reducing emissions by allowing companies to buy and sell permits to pollute, a system known as cap and trade.

With work still to be done on health care and deep divisions in Congress over the best approach to climate change, the chances the Senate will pass a climate bill by the end of the year are slim. That means U.S. negotiators are likely to not have firm targets set before 192 nations gather in Copenhagen, Denmark, to hammer out a new treaty to slow global warming.

"This should not be a partisan issue," Obama said, urging bipartisan answers on a day largely devoted to raising campaign money for fellow Democrats. "The closer we get, the harder the opposition will fight."