The United States is dropping plans for a controversial missile defense shield and replacing it with a "new missile defense architecture in Europe," President Obama said Thursday.

U.S. Defense Secretary Robert Gates also is holding a briefing Thursday at the Pentagon to explain "why this new idea is better," a senior administration official said. The official was not authorized to speak on the record.

But Biden explained the logic of doing so, saying Iran -- a key concern for the United States -- was not a threat.

"I think we are fully capable and secure dealing with any present or future potential Iranian threat," Biden said in Baghdad, where he is on a brief trip.

"The whole purpose of this exercise we are undertaking is to diminish the prospect of the Iranians destabilizing that region in the world. I am le 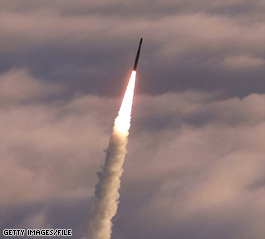 Biden said he is "deeply" involved in the review of the missile defense program.

The program called for the U.S. to set up a radar site in the Czech Republic and 10 missile interceptors in Poland to counter the threat of Iran launching long-range missiles at America's allies in Europe. See how the system would have worked » | See a map of what were proposed sites »

The Bush administration had cited the perceived nuclear threat from Iran as one of the key reasons it wanted to install the missile shield in Eastern Europe.

But a 60-day review ordered by Obama recommended a different approach, the administration official said.

"The technology has evolved in a way that allows you to deploy a system that is more effective in countering both short-, medium- and long-range missiles," said the official, contrasting the types of missiles that Iran, for example, is believed to have with intercontinental ballistic missiles of the kind feared during the Cold War.

"It's a more advanced system, more cost-effective and efficient," the official said.

Officials are not yet describing the new system in detail, saying only that it will be more dispersed and "regionally focused."

Gates will be joined at the Thursday briefing by Gen. James E. Cartwright, vice chairman of the Joint Chiefs of Staff and the point man for the missile defense shield program.

The U.S. reversal is likely to please Russia, which had fiercely opposed the plan.

Obama has been seeking a stronger relationship with Russia and better cooperation from the Kremlin to support tough U.N. economic sanctions against Iran if it continues to pursue its nuclear ambitions.

There was no comment Thursday morning from Russian officials. But the issue has been a sore point in relations between Washington and Moscow, with Russia believing the shield ultimately would erode its strategic nuclear deterrent.

The missile shield issue came up in July during a meeting between Obama and Russian President Dmitry Medvedev in Moscow. Obama maintained that Russia had nothing to fear from such a system, which would be designed to intercept a solitary missile from Iran or North Korea, as opposed to "a mighty Russian arsenal."

A U.S. delegation held high-level meetings Thursday in Poland and the Czech Republic to discuss the missile defense system. Officials in both countries confirmed the system would be scrapped.

In a statement, Czech Prime Minister Jan Fischer said that Obama told him in a Wednesday phone call that the United States was shelving its plans. Fischer did not say what reason Obama gave him for reconsidering.

A spokeswoman at the Polish Ministry of Defense also said the program had been suspended.

"This is catastrophic for Poland," said the spokeswoman, who declined to be named in line with ministry policy.

Poland and the Czech Republic had based much of their future security policy on getting the missile defenses from the United States. The countries share deep concerns of a future military threat from the east -- namely, Russia -- and may look for other defense assurances from their NATO allies.

"At the NATO summit in April, we adopted a resolution focusing on building a defense system against real, existing threats, i.e. short-range and medium-range missiles," Fischer said. "We expect that the United States will continue cooperating with the Czech Republic on concluding the relevant agreements on our mutual [research and development] and military collaboration, including the financing of specific projects."