US urges speedy action on Greece 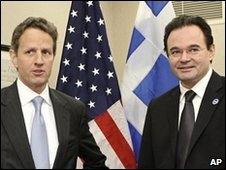 US Treasury Secretary Timothy Geithner has called on the IMF, the EU and the Greek government to act quickly to tackle Greece's debt crisis.
Mr Geithner asked the IMF and Eurozone countries to put together a package of strong reforms and financial support.
On Friday, Greece asked for an EU-IMF bailout of its debt-ridden economy.
Mr Geithner was speaking after talks with IMF and European officials at a meeting of the International Monetary Fund in Washington.
On the sidelines of the twice-yearly meeting, he held talks with Greek Finance Minister George Papaconstantinou, IMF Managing Director Dominique Strauss-Kahn and several EU officials.
"Secretary Geithner encouraged them to move quickly to put in place a package of strong reforms and substantial concrete financial support," said a statement from his office after the talks.
Ahead of the meeting, the Group of 20 big economies said the world was emerging faster than expected from its deep recession.
After talks in Washington on Friday, G20 finance ministers said the pace of the recovery was largely due to the huge amounts of government money pumped into national economies.
Debt due
Consideration of Greece's request for emergency loans totalling 40bn euros ($53bn; £35bn) in the first year was set to be a major focus of the talks.
Nations using the euro would contribute 30bn euros with the rest coming from the IMF.
The terms of the loans have not been agreed, but Mr Strauss-Kahn has said the IMF will "move expeditiously" in response to Greece's appeal.
Mr Rehn said he thought the EU-IMF package could be completed by early May.
The funds are needed later that month when a large tranche of Greece's debt comes due for renewal.
German officials have said Berlin will do its bit.
But there has been public opposition to funding a bail-out and Chancellor Angela Merkel said any aid would come with "very strict conditions", including a credible savings plan.
The Greek government has already taken austerity measures, including cutting government workers' pay, freezing pensions and raising taxes.
The cuts have proved unpopular, prompting strikes and demonstrations.
There is rising anger at the involvement of the IMF and opposition to the bailout is increasing, says the BBC's Gavin Hewitt in Athens.
On Friday evening, several thousand protesters took to the streets of Athens to demonstrate against further austerity measures.
The government's cost of borrowing on international markets has spiralled, making it prohibitively expensive for Greece to borrow money from investors to service its debt.
Athens had hoped that just the promise of EU support, agreed last month, would be enough to reassure markets and help its recovery.
But Greece's problems have continued to hit investor confidence in the euro and other European economies.
Bank tax?
At its meeting on Friday, G20 finance ministers said government efforts to jump-start recovery were paying off.
But with the global economy recovering from the financial crisis, G20 members should look at reducing their stimulus spending and allow ultra-low interest rates to rise to more normal levels.
Thanks to "decisive and coordinated measures at home and across the G20", said US Treasury Secretary Timothy Geithner, "the world economy is growing and the financial system is healing".
The finance ministers also asked the IMF to analyse in detail a proposal to levy taxes on big banks and other financial institutions to stem risk and pay for possible financial failures.
Tweet
Pope Shenouda Article