Much is made here of the fact that Hosam Smadi seems to have been torn between contemporary Western values and Islamic ones. This is, however, something we have seen in jihadis before. In fact, the jihad plotting itself may be an attempt to outweigh the negative effect of the sins the jihadi has incurred. Dallas jihad plot update. "Internet postings show two sides to accused terrorist," by Byron Harris for WFAA-TV, October 1: 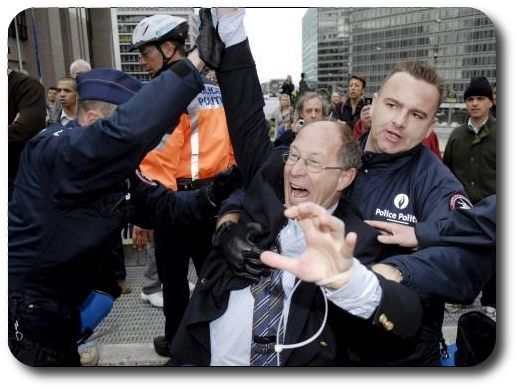 One day he was a teenager looking for a wild time, the next a dedicated al-Qaeda wanna-be who appeared to be on the edge of insanity.

Dozens of Internet postings obtained by News 8 have uncovered a confusing picture of the man accused of trying to destroy a downtown Dallas office building last week.

When Hosam Smadi arrived in California from Jordan, he dyed his hair red and found a car to drive. He made videos from behind the wheel, most notably one on how to break through a traffic jam by following a fire truck.

But in January, still only 18, he wrote an ominous offer to help Osama bin Laden on a Middle Eastern website called the "Military Wing of the Popular Resistance Committees of Palestine."

"I want to be with the resistance that is with Shekih Osama, may God extend his life and grant him victory," Smadi wrote in informal Arabic. "I swear that my blood is as fire in the desire for Jihad. But, if I can only find the beloved Sheikh Osama may he live long.... the faith in my heart for jihad in his sake until death and our purpose is paradise God willing."...