The Pope in America 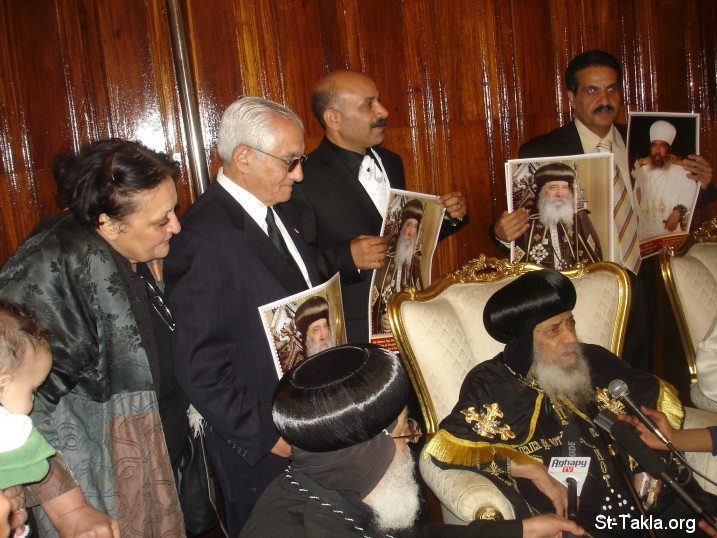 The 86-year-old spiritual leader of the 15 million-member Coptic Orthodox Church spent much of Wednesday 20 September in one-on-one sessions with many of the 200 priests, 14 bishops and dozens of monks at the bucolic Holy Virgin Mary Spiritual Vineyard on Gould Road in Charlton, Massachusetts.
Pope Shenouda III of Alexandria then, amid applause, got into a golf cart for the short ride from the meeting room and chapel to the Assembly Hall of St Theodoseus for what was expected to be at least a two-hour service.
Security was tight for this year’s North American Annual Coptic Clergy Seminar at the 187-acre vineyard, which opened in 1998 and serves as a retreat and meeting area for members of the Coptic Church. The Coptic Church, which started in around 45 AD, is an original and conservative expression of Christian faith that has its roots in Alexandria, Egypt.
Three Charlton police officers stood by the main gate to the facility early on Wednesday morning and a police presence and security contingent made up of members of St Mark’s Church was very visible throughout the grounds on a cool, windy, cloudy day.

New churches
As Pope Shenouda III, the 117th Pope of the Coptic Church, entered the hall he was greeted by chanting by the clergy members. He sat in the middle of a large table at the front of the church and signed several documents before beginning what appeared to be a lecture in Arabic in a strong voice.
Among those in the audience for the afternoon service were the wives and children of the priests who, according to the Coptic faith, are allowed to have families.
Pope Shenouda also attended a 90-minute meeting in the assembly hall in the early evening with the congregation of St Mark's Coptic Orthodox Church in Natick.
Members of the approximately 1,000-member Natick-based church submitted written questions to Pope Shenouda who then answered these questions. He later left for a visit to Cleveland to see his doctors, according to Father Youhanna Gobran, 40, one of the five priests at St Mark’s.
Father Gobran and Bishop Suriel, head of the approximately 20,000-member Melbourne, Australia, Coptic Diocese, said Pope Shenouda was in good health. However, he had had a fall last year and hurt his hip, therefore did not attend last year’s seminar.
After the visit to Cleveland, Pope Shenouda made a trip to the Coptic Church in Mississauga, Ontario, after which he returned to Cairo last Monday.
Pope Shenouda had, on Tuesday 15 September consecrated the St Mary and Archangel Michael Church in Nashua, N.H., that was recently purchased by the Coptic Church.
Pope Shenouda started off as a monk in 1954, was named the Coptic Orthodox Church’s bishop for Christian education in 1962 and has held the title of pope since 1971. He has written many books poems and is known to his colleagues as a man with a keen sense of humour.

No filming
“Our first two days here were sunny and warm,” said Bishop Serapion, leader of the Southern California Coptic Diocese. “Today's weather reminds us that we aren’t in Southern California.”
The Southern California Diocese is celebrating its 40th anniversary in November. A message by the pope to the members of the diocese was scheduled to be filmed, to be broadcast back home Bishop Serapion said. St Mark’s Church member Raouf Zaki had also wished to record an interview with Pope Shenouda about Coptic hermits and monks that is expected to serve as the introduction to a film he is making titled Desert Stars.
Both filmings, however, were cancelled when private sessions with members of the clergy prevented them from taking place.