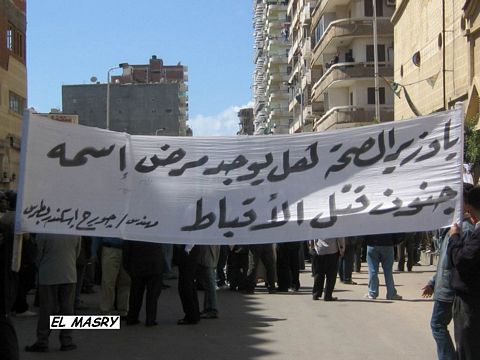 Many disputes which arise between Muslims and Copts are hastily termed “sectarian incidents” and are used to cite persecution against Copts. However, I should like to draw a distinction between suchMany disputes which arise between Muslims and Copts are hastily termed “sectarian incidents” and are used to cite persecution against Copts. However, I should like to draw a distinction between such incidents and others which involve injustice to masses of Copts. Branding the former types of incidents as ‘persecution’ takes them out of objective context and makes it difficult to resolve them; in many cases religion has nothing to do with the dispute. Worse, security officials themselves more often than not treat the matter as a sectarian issue, which only serves to pour more oil into the fire.
I made this introductory note to stress the difference between problems of a societal or limited sectarian nature and problems that result in perpetual suffering for a large sector of the population on account of their belonging to a specific religion. When this sector is largely the Coptic sector, when the suffering is inflicted exclusively on the Copts—never on the Muslims, and when the affliction occurs under the nose of or is inflicted by the administration, it definitely qualifies as ‘persecution’ against Copts. In which case it is trivial to propagate such rhetoric as “There is no difference between Muslims and Copts” or “Muslims and Copts share close relations which go way back in time”, words that ought never to blind us to reality or keep us from trying to reform it.
I have before me a file of the problems of the Copts in Minya, Upper Egypt; specifically those who belong to the bishopric of Maghagha and al-Adawa. The file overflows with problems concerning the building of churches and buildings that house services affiliated to churches. Further, it includes horrendous tales of the agony Copts have to go through to obtain licences to build homes, since these homes are seen by the administration as potential churches. The near-impossibility of getting a building licensed as a church, coupled with the dire need of growing congregations for churches, has in several cases led some Copts to donate private buildings or homes for use as churches, prayer houses, or social service buildings. This has in turn led the authorities concerned to view Coptic-owned buildings with suspicion; as though every Copt who wished to build a house should at first clear himself or herself from the charge of prior intention to turn it into a church. Clearing oneself from this charge—kindly note what ‘charge’ we are talking of—is futile, with the end result that the authorities appear bent on arrogantly penalising the Copts as some form of pre-emptive measure against building churches.
The file of Maghagha and al-Adawa details the agony, which I repeat is tantamount to persecution, suffered by the Copts where their churches, societies, houses, and citizenship rights are concerned. In the process, their contribution to the service and development of the Minya community as a whole falters. Following are two samples of the problems commonly encountered.
The old and dilapidated building of Maghagha bishopric includes a church, the bishop’s residence, and a guesthouse. The official building committee in Minya issued a report that the building posed a threat to its occupants and visitors, and was too dilapidated to restore or renovate. In April 2007 the bishopric accordingly applied for licence to build a new, bigger building on an adjacent piece of land it owns, to accommodate the needs of the congregation which had considerably grown over the years. Two-and-a-half years later, and following several re-applications, follow-up, and pleading on the part of the bishopric, a licence was issued to demolish the present building and rebuild one on the same area. Those at the bishopric felt a bitter sense of injustice; after all the arduous attempts and humiliating setbacks, they are required to demolish their building and remain without one until a new one is built, then end up with a building entirely inadequate for their needs?
The 4th-century church of the Holy Virgin in Deir al-Garanous has another story to tell. As a spot visited by the Holy Family during its flight into Egypt in the first century, it attracts many local and foreign visitors. In March 2004, the church applied for licence to renovate an adjacent guesthouse. A licence was issued by Minya governor in August 2006, and work started accordingly. Before the renovation was completed the work was halted on the pretext that it violated the new building law of 2008. It took the church until July 2009 to persuade the authorities that the work was being conducted according to regulations issued prior to the law. But the work has not yet been resumed because this requires the written approval of the governor, which has not yet seen light.
There is much more to the Minya file than the above; I will surely be bringing more cases to the attention of Watani readers in future articles.