There is evidence that both Israeli and Palestinian forces committed war crimes in the recent conflict in the Gaza Strip, a UN report says.
It accuses Israel of deliberately using "disproportionate force" in the three-week operation in December and January.

Palestinians and human rights groups say more than 1,400 Gazans were killed, but Israel puts the figure at 1,166. 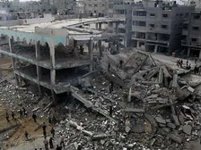 The report said Israel must be held accountable for its actions during the war, a process which could lead to the conflict being referred to the International Criminal Court.

Israel, which had refused to co-operate with the UN fact-finding team, said the report was "clearly one-sided".

It reiterated that it was "committed to acting fully in accordance with international law and to examining any allegations of wrongdoing by its forces".

The report accuses Israel of imposing "a blockade which amounted to collective punishment" in the lead-up to the conflict.

It "concludes that the Israeli military operation was directed at the people of Gaza as a whole, in furtherance of an overall and continuing policy aimed at punishing the Gaza population, and in a deliberate policy of disproportionate force aimed at the civilian population," said the UN statement.

Statement by the Israel military that its operation involved very few errors showed, said the report, that its failure to distinguish between military and civilian targets was "the result of deliberate planning and policy decisions".

The report found there was also evidence that Palestinian groups had committed war crimes, and possibly crimes against humanity, in their repeated rockets and mortars attacks on Israel.

It said there launching of rockets which "cannot be aimed with precision at military targets" breaches the fundamental principle of sparing civilian lives.

"Where there is no intended military target and the rockets and mortars are launched into civilian areas, they constitute a deliberate attack against the civilian population," it said.

It called for the immediate release of Gilad Shalit, the Israeli soldier seized in a Palestinian raid in 2006 and taken to Gaza.

Both the Israeli and Palestinian authorities are criticised for the treatment of their own civilians during the conflict.

Israel's interrogation of political activists and repression of criticism of its activities had "contributed significantly to a political climate in which dissent was not tolerated", it said.

Meanwhile, the alleged "arbitrary arrests" and "extra-judicial executions" of Palestinians by the authorities in both Gaza and the West Bank were also criticised.

The 574-page document recommends that authorities in both Israel and Gaza be required to investigate the allegations and report to the UN Security Council within six months.

Israel says it has carried out more than 100 investigations into allegations of abuses by its forces - most were dismissed as "baseless" but 23 criminal investigations are still pending.

The Israeli military says troops acted lawfully during the conflict.

It has admitted to a small number of errors - such the deaths of 21 people in a wrongly targeted house - but said these had been "unavoidable".

The full report - which is based on 188 interviews, more than 10,000 pages of documentation and 1,200 photographs - will be presented to the UN Human Rights Council at the end of this month.

Eight months after the conflict, very little reconstruction has taken place in Gaza because of the strict Israeli-imposed blockade which bans all but essential supplies from entering the enclave.

The stated aim of the blockade is to weaken Hamas's leadership but aid agencies say it serves only to punish the civilian population.

UN officials have repeatedly urged Israel to end its blockade of the Hamas-controlled territory.